When an evil, enigmatic villain named “CATS” threatens the very balance of the universe, a few things get lost in translation. 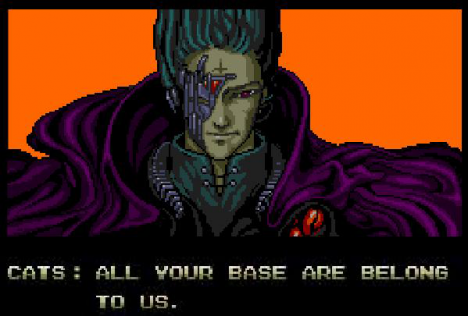 According to Knowyourmeme.com, All Your Base Are Belong to Us (AYBABTU, AYB) “is a popular catchphrase that swept across the Internet at the dawn of the 21st century, as early as in 1998.”

Origin
Zero Wing, a side-scrolling, shooting game set in space, was first introduced to arcades in 1989. The player, the lone starfighter of a “ZIG” spacecraft, would fire lasers, avoid incoming fire and maneuver through eight levels of enemy invasion.

“[The] side-scrolling space shooter might have been doomed to obscurity if not for one of the most hilarious mistranslated “Japenglish” introduction sequences in video game history,” writes Gamespy.com’s William Mistretta. “Instead, it became a nationwide fad… Perhaps the first true geek catchphrase of the new millennium.” Learn more about “Japenglish” or “Engrish” >

When porting the arcade game for play on home systems, the developers wished to expand its plot for European and U.S. audiences. Under pressure of aggressive release dates, the team roughly translated the Japanese dialogue into English, resulting in such infamous lines as “Somebody set up us the bomb,” and “All your base are belong to us… You have no chance to survive make your time!”

Captain: What happen ?
Mechanic: Somebody set up us the bomb.
Operator: We get signal.
Captain: What !
Operator: Main screen turn on.
Captain: It’s you !!
CATS: How are you gentlemen !!
CATS: All your base are belong to us.
CATS: You are on the way to destruction.
Captain: What you say !!
CATS: You have no chance to survive make your time.
CATS: Ha ha ha ha …
Operator: Captain !!
Captain: Take off every ‘ZIG’!!
Captain: You know what you doing.
Captain: Move ‘ZIG’.
Captain: For great justice.

Before the founding of YouTube, the more creative of early digital settlers would often upload flash-based movies to Newgrounds.com, where the now famous AYB music video (below) was posted in 2001. It soon spread from inboxes to online forums, before crossing over to the real world in a variety of forms, from t-shirts to mouse pads.

Memelife: Where is CATS Now?
Haven’t seen or heard of All Your Base Are Belong to Us before? Not surprising. Digital years pass like dog years, and countless memes have forced CATS, with his broken English, from the limelight.

The meme has since evolved into an almost secret handshake, its meaning eluding most Internet users; now used a nod to early digital underground culture or as a catchphrase to  establish a semblance of digital street cred. 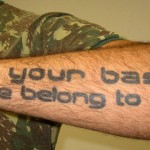 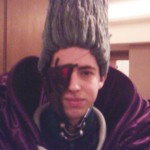 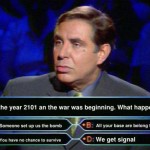 Learn more about All Your Base Are Belong to Us at Knowyourmeme.com >