Ever since Isaiah Mustafa debuted as the Old Spice Guy in 2010,  the company has consistently demonstrated its online savvy. I find its humorous and unapologetic approach refreshing and brilliant.

From quick-witted topical tweets to rapid responses at YouTube comments, I love how Old Spice fearlessly broadcasts or produces content unrelated to their product — while still building its brand. It’s struck a great balance between product feature/benefits and the type of content consumers prefer to read, watch and share online. Old Spice is behaving like your witty friend making a fun post on Facebook or Twitter, not an annoying furniture salesperson.

While the approach may not move product immediately, lightly-branded, engaging connections are bound to strengthen your online street credibility and relevance for future brand consideration.

For advertisers, when was the last time your brand had the intestinal fortitude to post something from left field, or without branding? It’s a risk most are uncomfortable taking.

In my past life, I’ve run online advertising campaigns with and without obvious branding. What data has indicated time after time is clear: sometimes it works, sometimes it doesn’t. It really depends on the brand and/or product. For an entry level sedan, the “left field” content caught our target’s attention. For a luxury vehicle, sometimes not so much.

Adapting Your Strategy
For digital advertisers, it’s important to test and monitor your campaign messaging and approach while in flight, to ensure your content resonates with your target. This can be accomplished via analytics performance measurement, depending on the campaign objectives (retweets, views and completion rates vs. clicks and conversion rates, etc.), or by simply reviewing comments and associated sentiment.

After the official unveiling of Doug, the Ford Focus Spokespuppet, it became quite clear we needed to adjust our strategy. While the character clearly resonated with our intended audience online, several blogs and news entities pointed out Doug’s less-than-discreet approach toward women upset some viewers. Honestly, we did anticipate this reaction, but didn’t expect the media to run with headlines like “Sexist Sock Puppet is New Ford Spokesperson.”

While we wanted to hold true to our strategic approach and director Paul Feig’s (Bridesmaids, The Office, Freaks & Geeks) plan, it was clear we needed to tone a few things down to address consumer, media and internal concerns. Read Brand Channel’s article “Ford to Focus Doug Character” >

Because we were still producing the Webisodes, with Rob Cohen (The Simpsons, SNL) later at the helm, we were able to capture a more well-rounded character, while still letting his “freak flag fly” (a Doug quote, not mine).

Lightly-Branded Content
Automotive enthusiasts and bloggers would often criticize our approach: We didn’t show the product, or even mention it, in all of the Webisodes. While we were sure to include features/benefits in most videos, we would sometimes shift focus toward the relationship between Doug, voiced by Paul F. Tompkins (Comedy Central), and his handler, John, who was played by John Ross Bowie (Big Bang Theory). So how did we balance it out?

While the Webisodes on YouTube served to entertain and inform, Twitter and Facebook provided platforms for product and brand messaging. A team of two writers (including the brainchild behind Doug, Sue Driscoll) would respond directly to comments we received from our fans and critics alike – often within a few hours. It is through their genius we were able to steer conversations toward the product, and how Doug and John demonstrated its features in action.

I truly believe our lightly-branded approach that made the brand/product easier to connect with in the first place.

While I’m unable to provide Ford’s internal numbers, the campaign clearly and significantly increased awareness and consideration, with some car buyers crediting the little orange guy for their purchase. 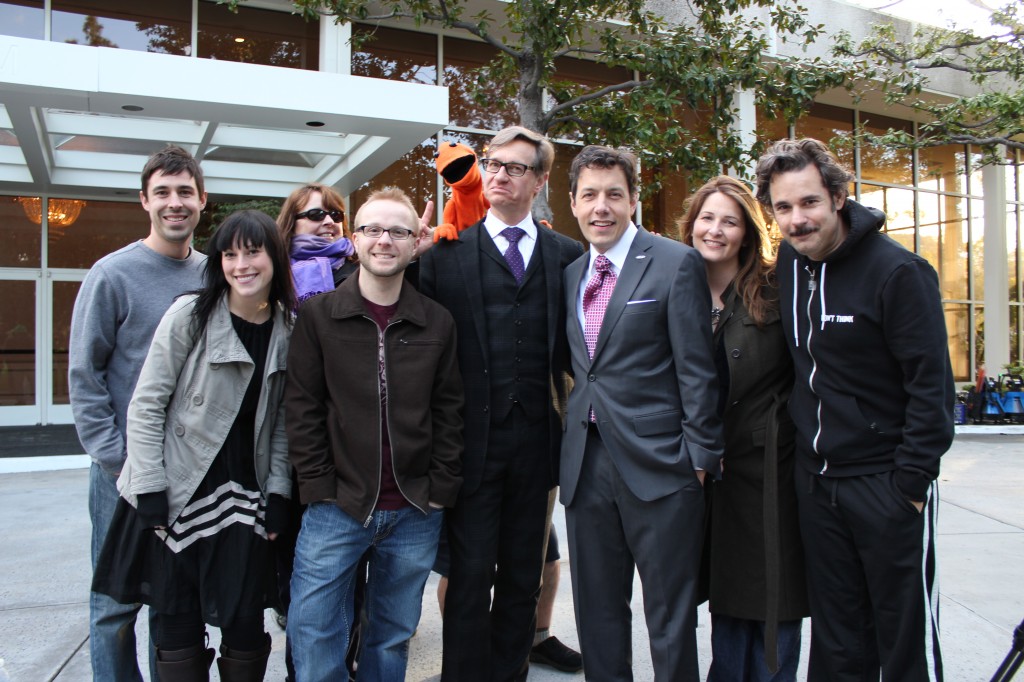 Edit: Just for fun, a few people might not realize we actually introduced Doug prior to the press conference Webisode. Click to watch Doug’s origins. Three videos, which featured the puppet in acts of heroism – saving people’s lives (referred to in the press conference). Ford has since removed these videos from YouTube, but, with a little digging, I found the first video in full – completely unbranded, which originally had close to a million views. Watch it here >