Digital Culture & Communities
President Obama holds live Q&A with Reddit community via “Ask Me Anything (AMA),” breaking records and crashing the site temporarily. Get the stats from Reddit > or Read the story on CNET > 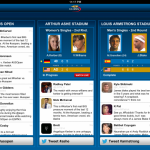