You remember the oldie, but goodie Atlanta Grape Lady who bellows like a beaten seal after a grape-stomping spill on a live newscast, right?

I was rather surprised this morning when I glanced at the view count: roughly 2.7 million banked in 8 years. Impressive, yesh? Perhaps.

The Digital Timeline is Speeding Up
But, In a post-Bieber and Rebecca Black world, 2.7 million views can happen overnight. Paid for with video-seeding media spends, or organically through the Underbelly, “viral” videos rack up impressive view counts more quickly nowadays than in the past… This makes it significantly easier, and more important than ever, to be able to identify and understand paid vs. natural view counts.

Here’s an organic gem I found on Reddit.com, likely to invade news feeds and tweet streams near you: Rope Swing Fail of the Century.

Posted to YouTube yesterday, and currently view-capped at 303 views, I expect it to rise fairly quickly.

P.S. Notice how similar the poor chap and the grape lady sound after their respective falls? Ouch, but… Classic.

The Internets: Where you can do, say, be or sell anything you want. 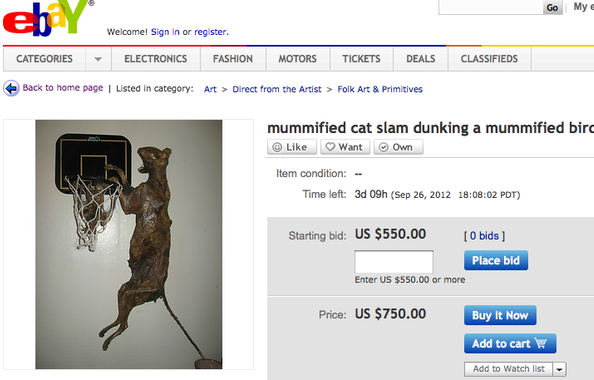 Sadly, someone snatched up this bargain before I could link to the eBay listing. How is this relevant to digital marketers? When in doubt, use cats.

Posted earlier today, currently tracking at 4,573 views. Expect it to hit millions within the week.

But, in all seriousness, friends… Mere mortals should never attempt Whitney.

“Every time we leave from visiting Misty’s family, her brother, Jay, walk us out to our car and performs an entertaining dance to whatever music we have playing in the car. We started recording these dances and have compiled them into dance video to play for our child. Every time she sees this video she can’t help laughing, smiling, and dancing. You can tell she loves her Uncle ‘Jay Jay.'”

From the Underbelly
Currently view-capped on YouTube with 303 views, don’t be surprised when you see Uncle “Jay Jay” on Facebook news feeds in the near future. I rather enjoyed watching the lady gawk in the background. Check out the Reddit discussion >

On a side note, I also won’t be surprised when the RIAA petitions YouTube to pull the video for copyrighted music distribution. Gah.

A Ford friend of mine’s son heading back to school. For a kid who made a name for himself online, Justin Bieber’s influence now extends to a Kindergarten near you.

From the Underbelly
Courtesy of Reddit’s front page, this video is sure to make its way to a newsfeed near you. Currently view-capped at 318 views, I expect it to pick up steam rather quickly. But first, some context:

Increase Your “Social” Vocabulary, from Urbandictionary.com

Frape [freyp]. noun, verb
A combination of the words ‘Facebook’ and ‘Rape.’ The act of Raping someones Facebook profile when they leave it logged in. Profile pictures, sexuality and interests are commonly changed, however fraping can include the poking or messaging of strangers from someone else’s Facebook account.

“Dude, did you see Jonny’s Facebook profile, someone fraped him big time.”

Fun, no? But, for me, there was something slightly “off” about the video, and it wasn’t the not-so-subtle placement of an adult toy & condom juxtaposed against the decor of a stereotypical young girls room. Or the offensive Justin Bieber poster…

Wait, was that a Durex condom?!

Marketing Paranoia
While I found myself anticipating the reveal, and smirking along the way, I kept expecting extremely subtle marketing messages for a brand of paint, or a new home renovation show to launch on HGTV later this year. Was I being duped as I watched?

Clearly my “social” cynicism or marketing paranoia at play. How many times have we fallen victim to clever marketers using unbranded content to draw us in, and make us pay attention? Read my previous post to see how lightly-branded content can build a product’s brand >

In my opinion, the real “advertisement” wasn’t so subtle, appearing in the video’s YouTube description. Tall Tales, a clearly savvy production company in the Netherlands, specializing in documentaries and commercials put this video together. I suspect their website traffic will spike today, and for weeks to come.

Regardless of the producer’s intentions, pure entertainment or increased interest in their company, I wonder: will consumers ever tire from this type and quality of advertising? Doubtful. Personally, I’m too lazy to care. 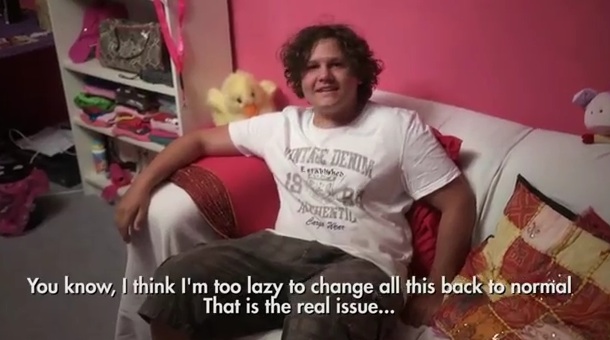 Read the original Reddit thread >, with comments from the video’s creator.

March 14, 1992: In the northwest suburbs of Chicago, Shaun Sperling read from the Torah and became a Bar Mitzvah. Shaun chose quite an interesting theme to signify the religious celebration.

Posted six days ago, the video has already received 49,000 views on YouTube. 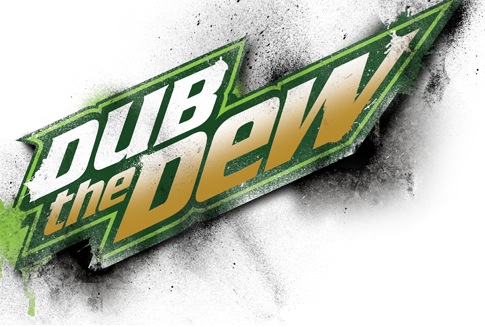 This includes my own crashes and blunders, as, in my career, I’ve paid more than my fair share of “tuition” for miscalculations with six to seven figure price tags.

For those in the digital marketing world, every action has a measurable reaction: from billions of impressions to individual clicks a consumer makes (or doesn’t make). For some, marketing online is more science than art. The vigorous testing, scoring, progress reports and report cards can be brutal to a marketer’s creative side. And, trust me, creative and media train wrecks are frequent – if you look at the numbers alone.

Measurement aside, for me, there’s something delicious and altogether captivating about awkward moments between marketers and consumers. On either side of the coin, it’s difficult to quantify that feeling of betrayal of trust, disappointment or “what the hell were they thinking” moment after experiencing an “off” ad or campaign.

While I think it’s important to examine a brand’s intention and objective when examining the wreckage of a botched campaign, online consumers have little incentive to care about such things beyond a simple comment or “Like” on a Facebook newsfeed about the event.

Regardless of the level of appropriateness or decency, are we really shocked that names like “Hitler did nothing wrong,” “Moist Nugget,” “Fapple” or “Diabeetus” made the top of the socially/consumer generated list? The underbelly of the Web feeds off these types of situations, and was largely laughing at Villa Fresh Italian Kitchen & Mountain Dew. It was a pure demonstration of consumer dominance over brands in the online space. And, to me, it was amazing to behold.

In a statement, Mountain Dew has apologized to fans offended by the debacle, and quickly distanced itself from the campaign as executed.

“Dub the Dew,” a local market promotional campaign that was created by one of our customers—not Mountain Dew—was compromised. We are working diligently with our customer’s team to remove all offensive content that was posted and putting measures in place to ensure this doesn’t happen again. Mountain Dew has a legacy of engaging its most loyal fans to tap innovative ideas for the brand through really successful programs like “DEWMocracy” and “Your Malt Dew” and so we sincerely apologize to all of our fans who may have been offended by this customer’s program.”

Regardless, both the pizza company and Mountain Dew didn’t appear to anticipate or appreciate the reality of a digital truth: People do and say things online they would never do or say in the “real” world.

Sex & Spaghetti Sauce
Which, indeed, brings us to RL (real life, for the less nerdy). Ragu recently launched a commercial that made it’s way to my Facebook feed, accompanied by a “I can’t believe this is actually a commercial” comment or two, followed by several “WTF?!” responses.

This deliciously awkward moment brought to you by Ragu, proud sponsor of The Bedroom Olympics:

I don’t know about you, but I’ve suddenly got a hankerin’ for some pasta. And, perhaps some therapy to discuss my childhood.

This isn’t a Janet Jackson/Justin Timberlake Halftime Special. This is Ragu directly associating mommy and daddy’s WWE Monday Night Raw wrasslin’ with their product. Exactly what a consumer wants to think about when enjoying pasta (note to mom: heavy sarcasm).

Honestly, I find the ad rather amazing and hilarious, in that wildly awkward-train-wreck kind of way. I applaud Ragu’s bravery and “Brand Building from Left Field” attempt, though I can’t help but notice the “what the hell” reaction many consumers are voicing across the social web.

My opinion? Leaving a consumer with an awkward feeling has a time and place, albeit infrequent and targeted. I think charities and non-profits often use this method (along with guilt) to their advantage, to move people beyond complacency toward action.

Regardless of where one falls with Ragu’s sexy spaghetti ad, it will certainly ignite the online landscape with thousands of comments, arguments and conversations. Millions of YouTube views aside, I know what many of us will be thinking about when we sit with family over a large plate of gluten-free pasta: Why didn’t Prego think of this?